How to Score the Post-Job Interview Callback - Powerstaff 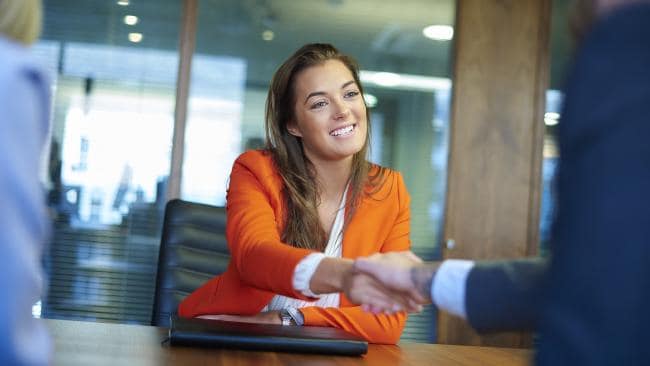 How to Score the Post-Job Interview Callback

DRESS nicely, sit sideways, walk slowly — and never sit down before an interview.

That’s according to body language expert Allan Pease, who says up to 90 per cent of first impressions and 60 to 80 per cent of face-to-face communications are non-verbal. In other words, you can say all the right things, and still never get the call back.

“The worst advice you can give a jobseeker is just be yourself,” he said. “If most candidates do that, they’ll never get a job.

Mr Pease, author of The Definitive Book of Body Language, said it was important to start preparing before the interview by working out what to wear. “How do you dress? Dress the way they expect you to look if, in their opinion, you’re the right person for the job,” he said.

“The way to find that out is ring the receptionists, say, ‘I’ve got a job interview with Mr [Smith] tomorrow and I’m a bit nervous — give me a little bit of help, what’s he like?’”

Mr Pease said the second thing to remember was that you were “on stage the minute you turn up in the car park”. “A lot of offices overlook car parks,” he said.

“You’re on display the minute you arrive, you don’t know who’s watching. We had a guy rock up here at my office to sell some computer solutions to our female staff.

“He pulled up, couldn’t see us, got out, looked in the mirror, adjusted his hair and tie, then reached down into his crotch and gave himself a readjustment. He walked into the office and wanted to shake hands, and no one wanted to shake his hand.”

Mr Pease said once you get inside, getting the handshake right was the next step. “Keep the palm straight, don’t have it pointing towards the floor or facing up,” he said.

“Down is submissive, up is aggressive. Donald Trump, he’s a body language bully — the only person who’s given him a palm-up handshake was Putin.

“Keep the palm straight, give the same pressure you receive. This takes a bit of practice, especially if you’re female. If she presents a ‘four’ and the interviewer gives a ‘seven’, he’ll squash her fingers.”

And if you’re carry anything like a handbag, briefcase, folder or CV, be sure to hold it in your left hand so you don’t have to juggle things around when you introduce yourself.

The same applies, he added, when you’re holding a drink at party. “For 90 per cent of people it’s fine, but [if you drop something] you look like a klutz,” he said.

To avoid falling into nervous body language during the interview, Mr Pease said it was helpful to “stand in the corner, out of sight, and practice body language confidence positions” beforehand. “People are amazed how their attitude picks up,” he said.

“Body language is an outward expression of people’s feelings, it’s an outward reflection of your emotions. If you’re feeling nervous, tired or scared, you might do negative gestures such as holding hands with yourself, crossing hands across your chest, locking you legs together.

“If you intentionally take positive positions, within two minutes you’re feeling those emotions. One of the most common ones is the steeple position, almost like you’re praying.

“[German Chancellor] Angela Merkel uses the steeple when she stands in front of a group of people, and she holds it for a couple of minutes beforehand to shore herself up emotionally.”

Once inside the interview room, another tip is to angle your chair away from the interviewer. “HR officers are notorious for sitting on the other side of the conversation,” Mr Pease said.

“But when you’re sitting [directly] across, conversations are shorter. Turn yourself 45 degrees. Angle your body away and turn your head. It takes all that pressure away, doesn’t make you feel like you’re sitting in front of the school headmaster.”

Before and after the interview, make sure you walk at an even speed through the office. “Don’t change gear at the door as you go through, because perceptive people will pick that up and get the feeling you’re not very confident, they don’t even know why they know,” he said.

And finally, he said, when you arrive in the reception area, “don’t sit down, stand up”. “If someone comes out to greet you and you come from a down position to an up one, you never look any good,” he said.

“Your voice is strained, your clothes are going to be [crumpled]. Stay standing, rock up and down on the soles of your feet.” That way, he added, the person behind the desk won’t forget you.

“One of the biggest challenges [employers have] is to resist making snap judgments in the first 10 seconds of meeting people,” he said. “[They might] look wrong, give a bad handshake, and you write them off. Whether their assessment’s right or wrong is not the issue.”